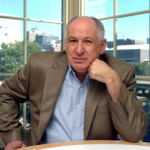 Joseph Schlessinger
Joseph Shclessinger is currently chair of the Pharmacology Department at Yale University School of Medicine in New Haven, Connecticut, as well as the founding director of the school’s New Cancer Biology Institute. He is also one of the world’s preeminent scientists in the field of signal transduction.
His extensive work on transmembrane signaling by receptor tyrosine kinases has led groundbreaking contributions to the field of cell signaling that have had a profound impact on biomedical research: the determination of the mechanism of action of RTKs and the elucidation of the critical role of dysfunction in RTKs in the pathology of a variety of human cancers provided the conceptual foundation for the identification of a new class of tyrosine kinase inhibitors that have been developed for the treatment of a variety of human cancers and remarkably two FDA-approved cancer drugs by his teams in Sugen and Plexxikon.