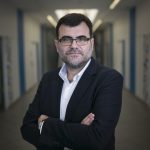 Eduard Batlle is an ICREA professor at Institute for Research in Biomedicine in Barcelona, Spain. His laboratory focuses on the mechanisms that drive colorectal cancer initiation and progression. Amongst other findings, his research originally identified the transcription factor Snail as a repressor of E-Cadherin gene expression during the Epithelial-to-Mesenchymal Transition, a role for EphB/ephrin signaling in intestinal cell positioning and the connection between the intestinal stem cell program and colorectal cancer. More recently, his research revealed a key role for TGF-beta signaling in stromal cells during metastatic colonization. He is currently interested in developing new prognostic and therapeutic tools for advanced colorectal cancer based on targeting the tumor microenvironment. His track record has been recognised through several awards/honours such as the Debiopharm Life Science Award (2006), Sabadell Banc Award for Biomedical Research (2010), Josef Steiner Cancer Research Award (2013), ERC Starting and Advanced Grants (2007, 2013), the Pezcoller foundation-EACR award (2014) and the Lilly Foundation Award for Pre-clinical research (2016).