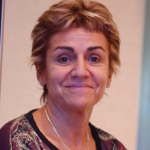 Anna Sureda
Anna Sureda, (MD, PhD) is nowadays the Head of the Clinical Hematology Department of Institut Català d’Oncologia – Hospitalet, Barcelona. She had previously been a senior consultant in Hospital de la Santa Creu I Sant Pau, Barcelona and a senior consultant focused in lymphomas and hematopoietic stem cell transplantation in Cambridge, UK. She was a visiting physician at the University of Heidelberg, Germany in 1990 for four months and at the Fred Hutchinson Cancer Research Center of Seattle in 1993 for another period of four months. Anna Sureda has focused her career on clinical investigations into the treatment of Hodgkin’s lymphoma, non-Hodgkin’s lymphoma and multiple myeloma patients evaluating novel therapies such as immunotherapy combined with stem-cell transplantation. Dr. Sureda has been an active member of the Spanish Cooperative Group of Lymphomas and Haematopoietic Stem Cell Transplantation (GELTAMO) since 1993 and during her stay in UK she was elected active member of the NCRN Lymphoma Study Group. She was appointed Chairperson of the LWP of the EBMT from 2004 to 2010 and Secretary of the same organization from 2010 to 2016. She is now one of the co-Chairs of the Lymphoma Committee of the cIBMTR.